Another View on Climate Change 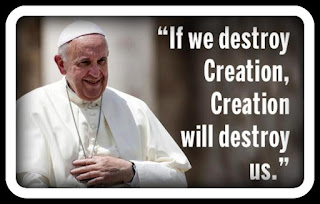 Pope Francis has been all over the news lately. His recent major encyclical on the environment has stirred up controversy - not just in the Roman Catholic Church, but also in the many countries he has been visiting. So far he has gotten pledges from around 60 mayors from major cities around the world "to reduce their cities' emissions, and to urge world leaders to pass a 'bold agreement' at the upcoming United Nations talks in Paris." Pledge To Fight Climate Change

So many Christians of all denominations are in denial that climate change exists and is caused by humanity's actions. Pope Francis has strong opinions on this subject and makes a point of telling the naysayers that we are stewards of the earth and every living creature upon it.

A while back I ran across the following interview between Bill Moyers and Kathryn Hayhoe - an evangelical climatologist from Lubbock, Texas - who along with her pastor husband wrote the book "a climate for change - global warming facts for faith-based decisions". Their discussion covers the effects of global warming and the drought in Texas, and the difference between previous droughts and today's weather from a faith-based perspective. Kathryn was named one of the "Green Heroes" on the Time Magazine List of the 100 Most Influential People of 2014. If you still maintain doubts that climate change and global warming are taking place, I urge you to watch this short documentary.

As the candidates are lining up for next year's presidential election, this topic should be utmost on the list of a candidate's positions on issues. Ask them the questions regarding climate change, and pay close attention to their answers. Are they for the people or for the industrial complex and big corporations that donate to their campaigns? We know who we want them to represent. Hold them to it. 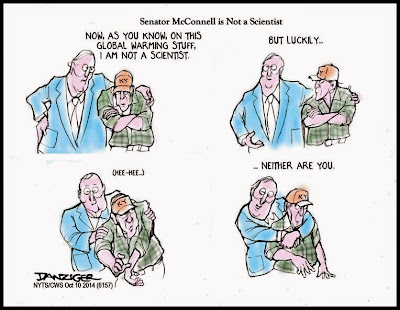 As we here in Texas are preparing for a string of 100+ degree days, give thought to our planet earth. May it see more rain as we did last month.