"I THINK that I shall never see.. 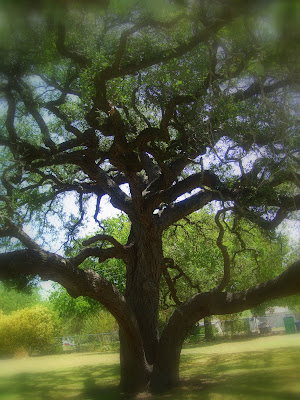 A poem lovely as a tree.

A tree whose hungry mouth is prest
Against the earth's sweet flowing breast;

A tree that looks at God all day,
And lifts her leafy arms to pray;

A tree that may in Summer wear
A nest of robins in her hair;

Upon whose bosom snow has lain;
Who intimately lives with rain.

Poems are made by fools like me,
But only God can make a tree."...Joyce Kilmer


Remember this one? How many of us had to memorize this lovely little poem in school? It's only as I've grown older that I really appreciate the view through Kilmer's eyes. The magnificent old oak tree pictured here is across the street from me and can be seen from my living room window. A friend of mine had an arborist look at similar ones on her country property, and he said they were in the neighborhood of 245 years old. This one is probably close to 200 years old.