My favorite curmudgeon, John Nance Garner - known to friends as Jack, has been at it again.  He's had another Letter to the Editor of the Denton Record-Chronicle published.

"Christmas time again. The time of the year when even tightfisted Republicans sometimes display a spirit of giving. The magic of the season brings about profound changes in some people.

Ebeneezer Scrooge blasted everyone who dared wish him a Merry Christmas. 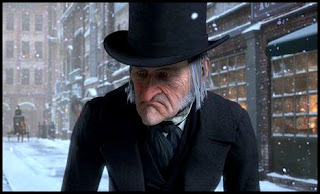 (Disney image)
Scrooge was visited by three spirits that changed the old miser in such a manner that it was said, “He knew how to keep Christmas in his heart the yearlong”; as a Democrat should.

Then there is the nemesis of the Christmas spirit; the Grinch’s blah makes Scrooge’s 'Christmas, bah humbug' sound like 'Silent Night.'

The Grinch doesn’t like anything about Christmas, not the singing, the laughing and not an outpouring of love. 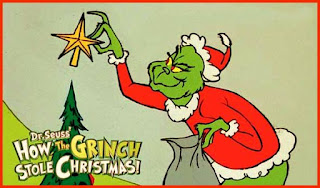 The Grinch decides to steal everything that smacks of Christmas. He is caught by a large-eyed child who just stares at him.

His thievery complete, he is astonished that the people in the village below are singing, laughing and there is an outpouring of love on Christmas day.

As the Grinch ponders this phenomenon, the little girl flashes into his mind and with that an outpouring of Christmas that fills his Grinch heart with joy, and it swells to the size of a Democrat’s.

The Grinch returns the stolen Christmas items and joins the people making merry.

And so, the spirit of Christmas turns two hardened Republicans into Democrats.

Now if it could do something about Donald Trump.

I second that!
Peace and Love,
Marilyn