They shall not be moved!

This past week has been filled with many heart-breaking stories and images. The massacre of police officers in Dallas was particularly disturbing. A sniper at any kind of demonstration -- no matter who the targets are -- seems to align America with the realm of terror-ridden countries around the world. If this occurs in Dallas, where will the next one occur? What kind of gathering will set off the crazies with their guns? Where will we be guaranteed safety? The "open carry" laws in Texas are cause for more concern. A man (or woman) with a rifle slung across their shoulder at any gathering is suspicious to say the least. Do we trust that they are among the "good guys"? 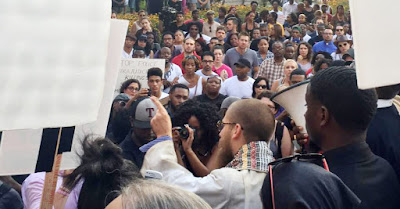 I am dismayed when watching images of this and other Black Lives Matter protests that the TV cameras do not show enough views of the many white faces among those who are demonstrating. I do not remember any mention of the white minister shown above with his hand raised who organized and led the Dallas march. (Although, I do not have cable TV. Perhaps he was shown on cable news.) It is that type of media coverage -- focusing on the violence and the blacks involved -- that is creating more of the same. It's time they focused on the positive images surrounding the events. This minister, Jeff Hood, not only organized this to protest the shooting of the black men in Minnesota and Louisiana, but when the shooting started he shepherded many to safety.

Had I known as I watched the news coverage into the wee hours of the morning that my first-born grandchild, Cameron, and his girlfriend, Allison were at the protest rally and march I would have been terrified.

The day after Dallas, Cameron posted the following on his Facebook page:

"Can I not weep for the officers killed and also weep for the people of color being killed by police brutality? Are the two mutually exclusive? Can I not have major grievances against the policing system whilst still having the utmost respect for the officers who fought and died last night protecting our right to demonstrate?

Needless to say, the last 24 hours have been nothing short of a whirlwind of emotions and events. Between the adrenaline rush of trying to flee disaster and waking up today to be called a 'bonafide inverse racist' with blood on my hands, it's been a struggle to meditate through and navigate this gargantuan spectrum of emotions, and I can't say that I've found clarity at this point.

Last night, as we were wrapping up our peaceful protest we were standing about a block behind where the shooting took place (eerily right across the field from the Kennedy Memorial Monument). In a split second, everything is erupting in chaos. We fled south and then east as police officers jumped in their cars and sped in the opposite direction. We could smell the gun smoke as we headed away from the red brick courthouse. As we took safe haven in the Dallas Morning News building, I began asking these questions to myself.

Yesterday I took a staff position with the group that organized this event, which means I would continue to be front and center for these demonstrations. I was beginning to re-think things, but my friend Eldred said it so perfectly when I asked if this experience would deter him: 'deter me? i'm not moved. hell, no terrorist attack is making me call in Black today. and, more than ever, am i convinced that change is NEEDED. otherwise, this will only get worse.'

I am not backing down. Extremists disguise themselves in every political movement and no prominent ‪#‎BlackLivesMatter‬ leader would ever condone this violence, and to blame the movement for this is unfair and unjust. Anyone who tries to condemn protesting because it attracts violence is echoing dictators who have done the same thing throughout history to justify their suppression of free speech. If any parties back down in this, police or demonstrators, we're playing into the hands of these extremists who are trying to puppeteer us into becoming enemies.

We shall not be moved." 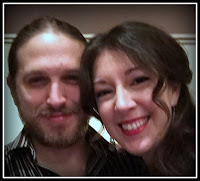 Cameron comes by his activism naturally. His father, Craig, gave me nightmares when he was of a similar age back in the 80s and marched along with Jesse Jackson at the South African Embassy in D.C., protesting apartheid. He survived, and has passed his love of equality and justice for all along to his son. I am proud of both of them.

The following video was produced shortly after the Orlando nightclub massacre, in honor of the victims. I think it is appropriate to listen to now for the Dallas victims as well.. We certainly do need love! The music begins at 1:57.


Love and Peace,
Marilyn
Posted by Marilyn Moragne at Sunday, July 10, 2016 6 comments: Links to this post