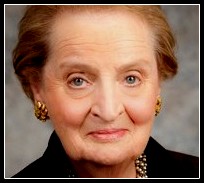 "Former Secretary of State Madeleine Albright describes herself as an 'optimist who worries a lot.' And lately, it seems, there has been much to worry about.". The article on NPR is worth reading. Fascism

Always considering myself an optimist, I'm shocked when some tell me I "worry too much". This mostly comes from my grown children. I've had this article in draft stage for a couple of months, as I thought maybe I am making much ado about nothing. When I read the above quote from Madeleine Albright this morning I knew I was not the only optimist who tends to worry. She has written a new book, Fascism: A Warning. Although she doesn't out and out call Trump a Fascist, she does say he is "the most anti-democratic leader that I have studied in American history."

As I am a big fan of Albright, I found myself justifying my own worries about the state of our country. I decided to go ahead and publish this post and then get back to bragging on all the good my children and grandchildren are up to in a future post. They are the ones who will be faced with undoing the damages made by the Trump administration.

***********************************
I have been hearing and reading many references to the "deep state"  recently. After running across a couple of definitions of the context currently being used, it reminded me of the 1960s, and the conservative conspiracy theory of "the Kingmakers", a behind-the-scenes group of powerful businessmen who were supposedly "really" running the country.

Then I did some research into recent similar theories. Only this time, it was not proposed by radical conservatives. I found the following excerpt in an essay on Bill Moyer's website. Anatomy of Deep State It was written by Mike Lofgren in 2014, before Trump popped up in the political arena. I have substituted Obama's name with Trump ..

Speaking of the authority possessed by the office of President, he writes:
"... President Trump can liquidate American citizens without due processes, detain prisoners indefinitely without charge, conduct dragnet surveillance on the American people without judicial warrant and engage in unprecedented - at least since the McCarthy era - witch hunts against federal employees (the so-called “Insider Threat Program”). Within the United States, this power is characterized by massive displays of intimidating force by militarized federal, state and local law enforcement. Abroad, President Trump can start wars at will and engage in virtually any other activity whatsoever without so much as a by-your-leave from Congress..." (by Mike Lofgren)

The above emphasis in italics is mine, of course. Add to the above the powers of the members of the so-called Deep State (who are really not so hidden)​, the "private enterprise" (read Mercer, Koch brothers, Sinclair Media, etc.) entities, to quote George W. Bush, "the deciders", and the direction the current Congress and Trump administration are leading us is akin to leading lemmings over the cliff!

Read the entire article if you want the bejeezus scared out of you. So much of what Lofgren wrote is similar to what is happening in Washington today.

Look at all the trouble the Trump administration has brought to us. See how he is dismantling and destroying so much of our country and its parks, institutions, safety regulations, civil liberties, etc., etc., etc.. 50+ years ago I thought we were in trouble with Communist Vietnam..​.now Trump has North Korea looming over us. He and his cohorts continue to deny critical climate changes, and we see some of the results in the horrific hurricanes of last year.

When Trump ordered troops be sent to the border of Mexico, he undoubtedly thought he could send in the Marines to show how tough he is. He is probably disappointed that the only ones he could send without the approval of Congress were the National Guard troops. And they are limited as to what they can legally do. Posse Comitatus Act

On February 23, 2018:
Trump touched on a wide-range of topics
during his CPAC speech. He called for Republicans to avoid complacency in the upcoming 2018 elections in order to keep both chambers of Congress in a march towards his own re-election in 2020.


He also praised his work in improving the economy and claimed his administration had removed more regulations than any other in history.
And that's a good thing? Most regulations were imposed to protect the American people, not just the major corporations. Then there's the new tax plan that also favors the rich and corporations.

Now there are the "trade wars", which Trump avows we will "win". Poor farmers - just to begin with.

It is becoming increasingly harder to remain optimistic. The bright spots are some of the younger candidates moving up in the political realm. Ones like Beto O'Rourke challenging Ted Cruz here in Texas. We love the older politicians such as Biden and Sanders, however, they are well into their senior years. We need more young people, such as the brave high school students behind the Never Again gun control movement, deciding to go into politics in the future. We may someday again see democracy in action in our great country. I hope I am alive to see it.

I urge Democrats to avoid complacency in the upcoming 2018 elections.
(Wiki)
Peace,
Marilyn
Posted by Marilyn Moragne at Monday, April 09, 2018 3 comments: Links to this post