First, I would like to give a "shout out" to my youngest grandchild, Kelly,
who turned 13 this past November. Kelly is a very unique young lady. She's a straight A student and has been throughout her school years, while also participating in various academic tournaments, such as a national mathematics pentathlon in 2015. She takes dance and cheer leading, loves to draw, and even shows a great interest in music, begging her dad for a flute when she was only nine years old. She valiantly tried to learn to play it from YouTube videos. When she became frustrated with the flute, she decided she needed to learn to play the ukulele! She got a ukulele that Christmas. A couple of months later, she was playing fairly well - again from watching YouTube. She then asked her dad for a special case for the ukulele, which was rather expensive. Dad proposed a challenge. Learn to play a particular song, and he would buy it for her. When Miss Kelly made her debut her cousin Cameron was there and decided to join in on her rendition of "Stairway to Heaven". This was only a couple of months after she received her ukulele for Christmas.

(I have tried several ways to embed this video with no luck. I even tried adding it again. I hope you can watch it now. If not, watch it on YouTube.)


I think they did a good job! Now I hear a rumor that Kelly may next be asking for a guitar. (She got a keyboard!)

This is the young lady who told me that she wanted to be a mechanical engineer when she grows up! Early last year she attended "Girls Day" at the University of Texas. I haven't heard yet if she will attend the next one in February.

She's always on hand to help when her Dad, Matthew, is doing something for Grandmommy that requires a little mechanical skill. My birthday gift this past November was a new blind for the front door. Here's Kelly helping with the installation: (Note the electric screwdriver.) 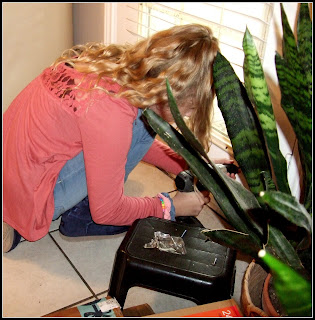 And last, but certainly not least, we have discovered Kelly has another talent. Kelly was in her middle school UIL One Act Play, "And a Child Shall Lead Them", on December 1st. She won an Honorable Mention award for Solo All Star Cast member. Aunt Carajean went to see her perform. The play was about the Holocaust. Part of her performance was playing a "fake" violin, which she "air-bowed" to violin music. My heart swelled with pride when I heard about this.

"And a Child Shall Lead Them"
Congratulations, dear granddaughter. I cannot wait to hear what you accomplish next! I see success in your future no matter which direction you choose to go. 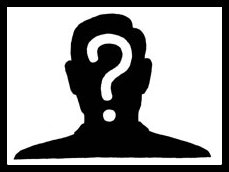 Recently a good friend of mine told me the following true story. I was enthralled with it, and asked him if he would write about it just as he told it to me. He did, and gave me permission to post it here. The one condition was that he remain anonymous.

"About two weeks ago on a very cold day, I came across a shabbily dressed man, one clearly living on the streets, sitting outside my supermarket having lunch consisting of a bag of potato chips, a can of Goya beans being eaten with a spoon, and a bottle of Gatorade. It was emotionally disturbing to see such despair in a human being's attempt to survive. Considering how I might give money to someone in need without offending his dignity, I was in a bit of a quandary. So after passing his table, I returned to his table holding out a $10 bill (all I had with me) saying to him that I had seen this money under his chair and thought it had perhaps fallen out of his pocket. His response was that he had not seen any money under his chair when sitting down. Well, I told him the money was his if he wanted it. He graciously accepted, with heartfelt thanks.

"Fast forward another week, I was standing in line at the supermarket, and there was what appeared to be a poorly dressed young woman of color checking out using store coupons for various items being purchased. By all appearances as well as her accent she may have been of Haitian descent, and I had to curiously wonder at what was an anomaly in a rather upscale supermarket. Only a short moment after stepping away with her purchases, and while I was being checked out, she turned and coming up to me, handed me a $10 bill. I was puzzled about why she was doing this, and she said she wanted to give me $10 toward the purchase of my groceries. I cannot remember when I have ever been so humbled, while thinking it should have been the other way around.

"Afterwards, I approached her with thanks, and putting my hand on her shoulder, I asked why she had shown such kindness towards me. Much of what she said was indiscernible, when in broken English she explained that her mother and her grandmother, had always taught her to do kind things for others...and I was the one she had chosen.

"This paranormal moment reminded me as something worthy of Rod Serling's 'The Twilight Zone.'"

My friend happens to be a very kind, cultured and well-educated man. I feel that there could not have been anything in his appearance or manner to indicate to anyone that he was in need. When he first told me this, he seemed completely unaware of the connection between the two events. The ten dollar bill seemed to be the only common denominator. He said his first instinct was to refuse the money from the woman. "Oh no, you would deny her a blessing by doing that," I cautioned, "this was your blessing in return for helping out your fellow man." 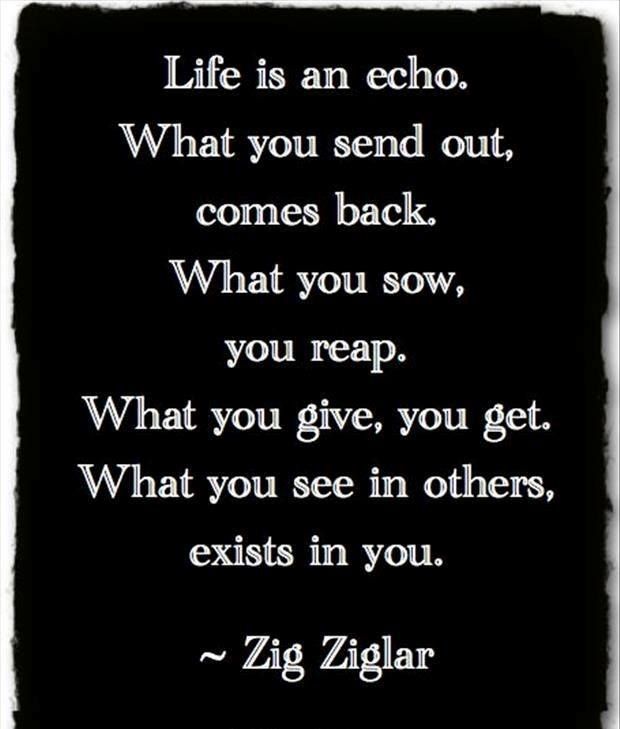 "The (spiritual) Law of Reciprocity, also known as the Law of Sowing and Reaping, allows us to receive as a result of what we give or do. Scripture makes it clear we might receive the same thing we give, such as mercy (Mt 5:7)...Typically, we receive to the same degree we give." (Larry Fox) "Genuine giving feeds joyfulness. The more generosity, the greater joy. And we can be more generous than we ever thought possible."— Geri Larkin in The Chocolate Cake Sutra

The law of reciprocity is also used in business and psychology.. and there is even a law of physics in the same vein. I prefer to think it all started with the "spiritual" law.

Knowing what a kind and generous man my friend is, I think he will be seeing more of the Law of Reciprocity popping up in his life.  Next time he won't be so puzzled when it happens.