Cutting the Deficit and Cutting Off Our Noses

How can anyone who has been paying attention the past ten years not be able to figure out what has been happening in Washington. They can now spout words like "Obamacare", and huge figures off the tops of their heads that don't really mean anything except more confusion for the American public. Politicians play on people's emotions and constantly point fingers at the other side to lay blame for the mess they have got us in. In the back of my mind I always feel there is something "missing" they aren't telling us... or they are twisting the facts to make their side look "better". These politicians know they are only acting. And not with the welfare of the average American in mind. Most of all, they are trying to ensure their own political future! They are playing to their supporters in hopes that they will be re-elected. I would say that is especially true of the newly elected Tea Party members.
With a little research on the Internet, one can come up with some realistic facts and figures like the ones below. Even without being an economist or having a degree in math, it seems pretty obvious how we got ourselves into the current financial mess. Of course, we need to reduce the deficit! But for those who argue that suspending the tax cuts implemented during the Bush administration will stop the creation of new jobs... Well! I ask, where have those jobs been since the cuts were implemented?? The tax cuts didn't stop the financial meltdown, and they don't appear to have helped with new jobs either. I would really like to know how they think cutting back essential programs like Social Security, Medicare, Medicaid, and even financial aid to college students is going to make up for the nearly two trillion dollars in tax cuts for the major corporations and the wealthiest Americans, and how it is going to benefit the majority of Americans.
I thought equality and the good of the "majority" was the purpose of democracy. I guess I'm naiive. In today's world, the folks with the most money have the most power. And they get the most "benefits". And we all know the statistics about the percentage of people who have the highest percentage of wealth in the U.S. That certainly is not a "majority".  But they seem to control the majority in Washington making the policy and decisions for the rest of us in this country today.
The Bible says, "To whomever much is given, of him will much be required; and to whom much was entrusted, of him more will be asked.". (Luke 12:48) And Jesus also said, "Render to Caesar the things which are Caesar's.." (Matt. 22:21) when asked about paying taxes. How can anyone -- no matter their belief -- think it is unfair for those in our country who are the most privileged and powerful to pay at least as much in income taxes as their secretaries? (Warren Buffett is quoted as saying he pays less than his secretary.) If suspending those tax cuts and loopholes will help the citizens in this country, and keep our government running, why is everyone not asking their representatives to do something about it? I have consistently let mine know where I stand on these and other important issues. The fact that I get form letters back full of party rhetoric and toots on their own horn lets me know that they don't care what this little grandmother in Texas thinks! I didn't vote them into office, and will not vote for their re-election. Surely, some of us working together can be as powerful as the conservatives were in the last election. 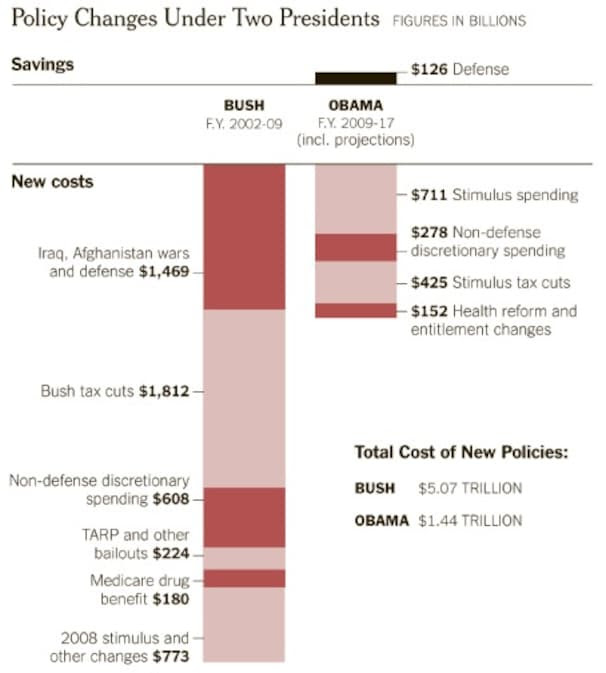 "What’s also important, but not evident, on this chart is that Obama’s major expenses were temporary — the stimulus is over now — while Bush’s were, effectively, recurring. The Bush tax cuts didn’t just lower revenue for 10 years. It’s clear now that they lowered it indefinitely, which means this chart is understating their true cost. Similarly, the Medicare drug benefit is costing money on perpetuity, not just for two or three years. And Boehner, Ryan and others voted for these laws and, in some cases, helped to craft and pass them.
To relate this specifically to the debt-ceiling debate, we’re not raising the debt ceiling because of the new policies passed in the past two years. We’re raising the debt ceiling because of the accumulated effect of policies passed in recent decades, many of them under Republicans. It’s convenient for whichever side isn’t in power, or wasn’t recently in power, to blame the debt ceiling on the other party. But it isn’t true." 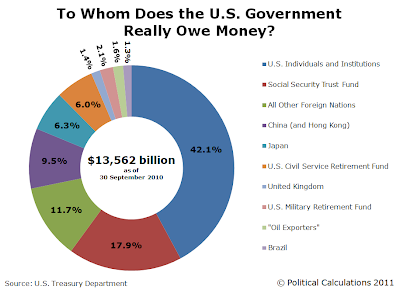 " Social Security is in the crosshairs of the debt negotiations currently going on in Washington. This, even though Social Security doesn’t add a penny to the deficit — it shouldn’t be in the discussions. Rather than adding to the deficit, Social Security is a creditor of the United States, just like China is. Of the $14.3 trillion the federal government currently owes its creditors, $2.7 trillion of that is owed to the Social Security Trust Funds." (Nancy Altman, co-chair of the Strengthen S.S. Campaign)
****************************
It has been almost a year since I went on my last "news fast". What happens in Congress the next few days is so critical, I will continue to be a worry wart, and haunt the news sites on the Web and even check in on the Cable news programs (not FOX, of course!). As soon as I know whether or not the programs that help me and a lot of seniors I know, are going to be cut, I intend to once again "fast"!
****************************
Much has been flowing to me along the lines of wholeness -- accepting the "shadow" in our personal lives, and knowing the necessity of contrasts in order for our world to exist. One book in particular covers this, "The Shadow Effect". I was surprised to see it in my local library, which is usually filled with the latest conservative books.. or the latest in the romance or vampire series. It is a compilation of writings by Deepak Chopra, Debbie Ford, and Marianne Williamson. The message I am getting after only a few chapters can relate to the "duality" of the debates going on in Washington. No matter which side you are on, you feel your side is right and the other is wrong -- or the "shadow". There must be integration and acceptance of both sides for our nation to obtain a sense of unity and wholeness again.
**************************
Guess I'll close with a little humor about "causes" in the U.S. We all have our favorites, but the guys have the gals beat! 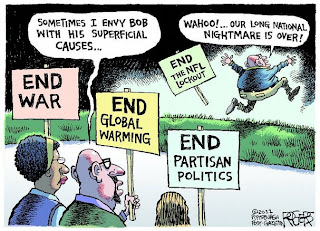 ******************************
Until next time, please consider donating to your favorite charity to help the pitiful victims of famine in Somalia. Watch the slideshow at the top of the page. Your heart will be touched. I read on one site a nasty comment from someone who said we have "children starving in America", and we should save our money for them! If you truly believe there are starving children in America, please donate to one of the many wonderful organizations across the country who are doing everything they can to eliminate even the slightest bit of hunger here. Even in a town as small as ours, less than 7,000 people, we have three different groups offering free hot meals for the hungry, lonely, or anyone who wishes to eat with us. I cannot believe there are people anywhere in the U.S. who are as desperate as these people in Africa. Even $5, if multiplied by thousands or millions of people, will save lives.
With love, peace, and hope for our future,
Marilyn
Posted by Marilyn Moragne at Saturday, July 30, 2011